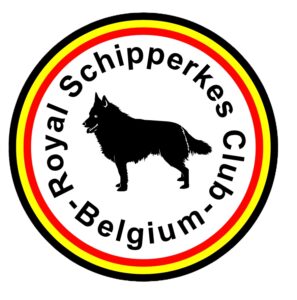 The breed club: The “Royal Schipperke Club” of Belgium brings together all the fanciers of the Schipperke and defends the interests of the breed. In 1930 the King of Belgium granted the title of ‘Royal’ to the club. On 4 March 1888 the Schipperke Club of Belgium was formed. It is the oldest breed club in Belgium and officially affiliated to the ‘Royal Cynological Union St-Hubert’ under number 1. The club has its own magazine (a Dutch and a French version), and as regards activities, the yearly Specialty Show (with Championship titles) is the major event.

Breed name and history of the Schipperke: The country of origin is Belgium. The Schipperke originated in the Duchy of Brabant (now the provinces of Antwerp and Brabant), more specifically the towns of Brussels and Louvain. In Flemish dialect Schipperke means ‘little shepherd dog’. Already about 1690 the Schipperke was the favourite dog of common people and  cobblers (shoemakers) of the St. Gery quarter of Brussels. It was renowned as a catcher of mice, rats, moles and other vermin. It became fashionable thanks to the Belgian Queen Marie-Henriette, wife of Leopold II, who in 1885 acquired ‘Blak’, the winning Schipperke at the Brussels show that same year.

General appearance: The Schipperke is the smallest shepherd dog in the world. Average height at withers 32 cm and average weight 4 to 7 kg, although, according to the standard, a weight between 3 and 9 kg is allowed. It is a shepherd dog of small dimensions, with a tapering muzzle and small erect ears. Some characteristics of the Schipperke make it very distinctive and really unique. The conformation or anatomical structure is robust. The coat is totally black and the hair on the body of medium length. The coat forms a marvellous outstanding ‘ruff’ (long hair around the neck), a ‘mane’ (long hair on the top of the neck), a ‘frill’ (long hair on the forechest) and ‘culottes’ (longish hair at the rear of the thighs).

The character: Schipperkes have an excess of personality, which we do not find in other breeds. It is an extremely curious, alert and watchful little dog, very affectionate, always busy, all the time nosing around and exploring.

Is he very emotional? Not really. He is not easily impressed. He doesn’t realize how small he is. This may lead to problems when he is threatened or attacked by a bigger dog.

Is he intelligent and easy to train?  Surely, it’s a little shepherd! Schipperkes are eager pupils and learn quickly.

Is he suspicious and what about his guarding instinct? He can be suspicious of strangers. He guards his house and family just like a big shepherd. His size makes him ideal for you if you are cramped for room or live in a flat: in that case he is the excellent guardian you are looking for.

Is he sociable? Definitely. He is very fond of children, but he will be suspicious of anyone trespassing in his domain.

Does he need to be active? Without doubt. He’s an attentive and very busy little fellow. He needs physical as well as mental activity. Playing with him, talking to him and training in basic obedience will keep him busy. His small size makes that he is completely happy and lives his live to the full even in a small garden.

Conclusion: a small and (for this reason also) undemanding ideal housedog; he requires no special care and has a very low incidence of medical problems.

General portrait or profile of the Schipperke: – a Belgian breed, the smallest shepherd dog in the world; Schipperke means ‘little – relatively speaking a rather robust and sturdy little dog; in Belgium, from 2006 on, docking of the tail is no more -average weight 5,8 kg, average size (height at withers) 32 cm. – by nature self-assured and tenacious; despite his size, no complexes whatsoever. – tireless, athletic, lively and agile, a small piece of dynamite. – an adaptable housedog, for both city and country living; needs minimal grooming, only brushing and combing; trimming of the coat or modelling of any kind as in many small  breeds completely unnecessary. – has a strong personality and is sometimes a bit – he wants personal attention and a loving treatment like a full member of the family; as a return he will do everything to please his boss or mistress. – life span 13 to 16 years; he will give you affection and joy (he’s a little clown) for many years!